I want to get a bit more indepth with an analysis of SpaceEngineer's gameplay. If you don't know the game, you should check it out here, it's worth it.

It is possible that in the future some aspects described in this this article will not be applicable to the game as it's being developed. To clarify, this article applies to the 01.026 update released in April 16th 2014.

You may find some of the analysis offensive; in that case, don't get me wrong - I really like this game a lot and it's absolutely promising for an indie title in early alpha; I also realize a lot of what's there is in a very unfinished state. There are multiple things that are still a bit, let's say "uneasy"; on the other hand, other aspects make a good impression, and I'd like to uncover the causes and consequences of either.


What Space Engineers does is to provide a voxel-based sandbox world where you can build, mine and survive in an asteroid field in space. It's pretty straight forward the first time you play it, especially if you are used to other voxel-based games like Minecraft. 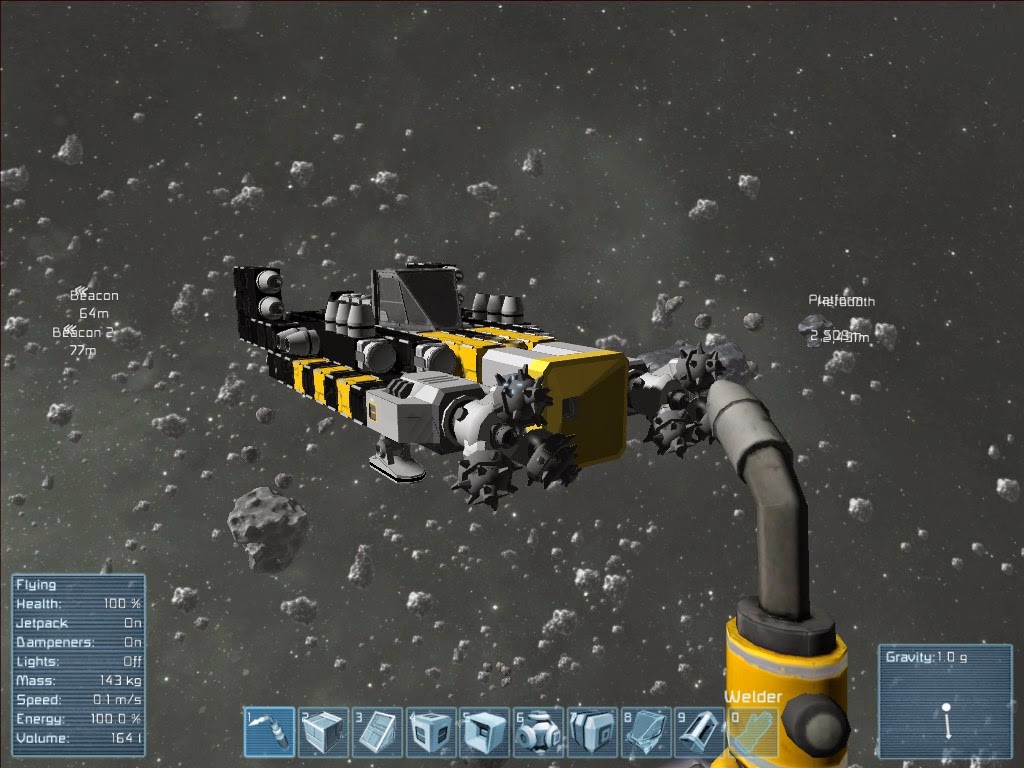 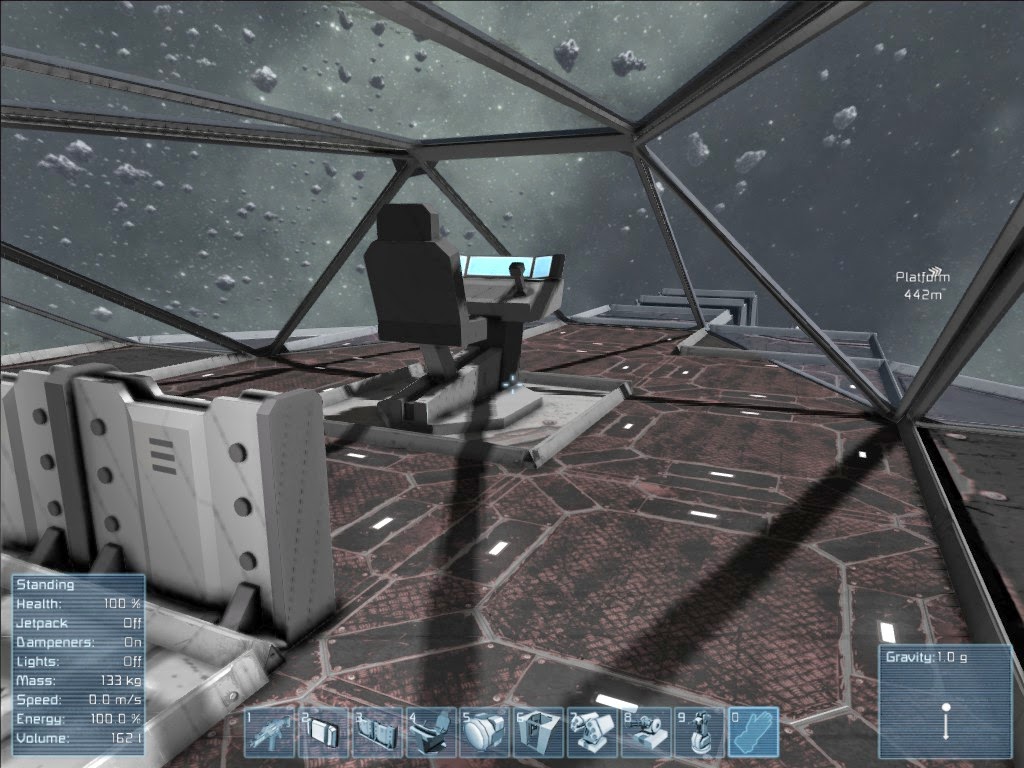 It's possible to build space stations, large spaceships and small spaceships from various - partly functional - parts. The latter use smaller voxels (first picture) while the former two make use of voxels twice as large (second picture).

Larger voxels are nice for large scale ships and stations. You don't need to build more voxels in order to get the same size, compared to when using a small voxel size.
However here lies another problem: you cannot pull the same level of detail on large ships as you can with small ones. Larger ones will always look very "rough" with the low voxel resolution that is being used here. 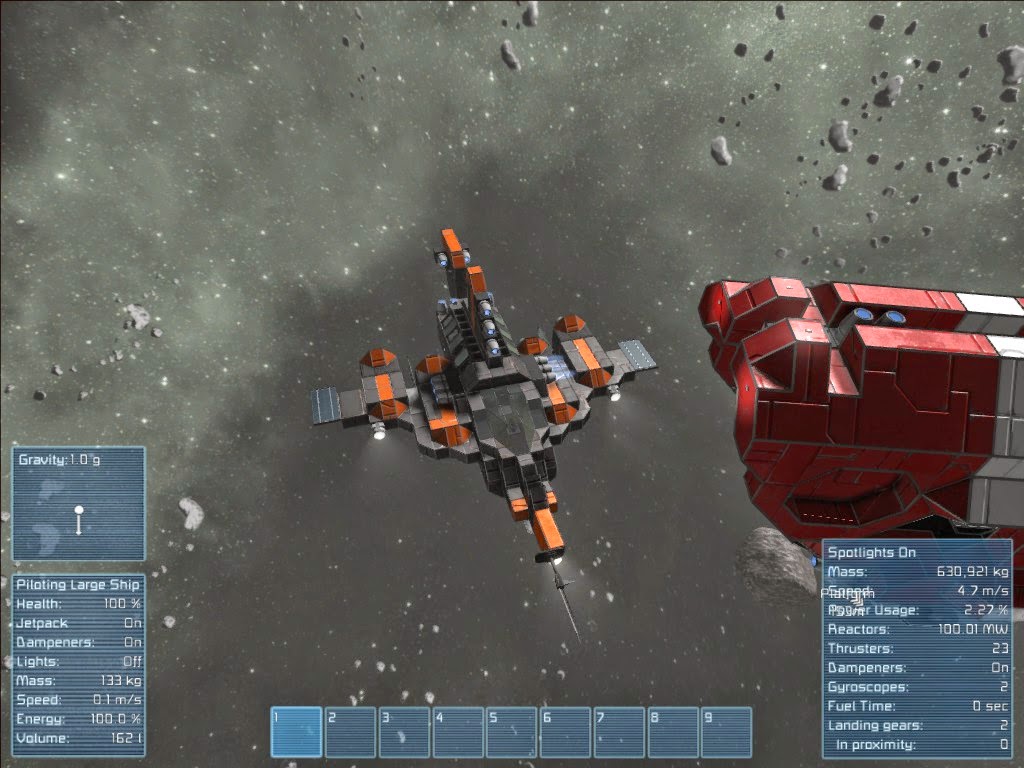 The previously mentioned effect is especially noticable in interiors. Since each voxel is as large as your character, you cannot use voxels for more subtle details. Each level of your space station/large ship thus needs to be one voxel high, plus another voxel for the floor. This causes them to look rather chunky and also limits the player in the creative process.

This effect can be decreased by providing a variety of thinner plates you can walk on that are designed for interiors, instead of using solid blocks all the time. While there are already some thinner plates in game, they are not designed to be used as floors or ceilings, but rather grates or similar.
Another possible solution is to provide something like a "brush size" for voxels instead of just scaling up small voxels: Large spacecraft/stations created with a default brushsize multiplier of 2x, while small ones with a 1x multiplier.


Where to start building?


I felt kind of "lost" constructing my spacecraft, being not too sure what to do or why. This happens to me even when already being used to the game and possessing basic knowledge of the game mechanics. I am not entirely sure of the causes for this, and I can name the following possibilities. 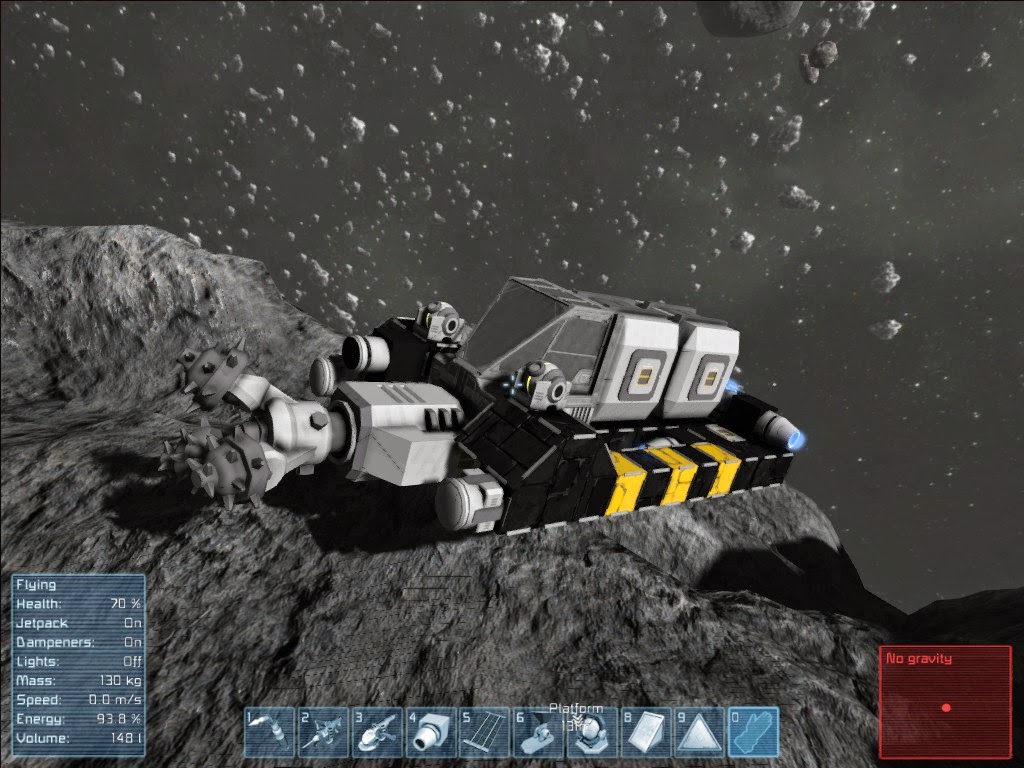 To the left you can see an optimized version of a small miner I created in survival mode, which took me ages to create from scratch. It's also my first legit spacecraft.

Construction in survival is tricky. Moving around large amounts of ore with an extremely limited inventory capacity is not nice at all and very time consuming. AND that is just for a very small ship. Limited inventory space also prohibits you from constructing large bases and forces you to somehow build a container close to the construction site first, then store all materials there. Larger objects take an enormous amount of material to construct; which in no way you can manage to manually gather as a single person. Construction time of larger spacecraft is not easier either seeing how welding the hull parts in order to finish them takes a lot of time also. The fact that a lot of resources are required to produce hull parts in the first place makes this worse (BUT it should be noted you can adjust production rates when creating the game or editing its settings).
The situation has improved alot with the recent introduction of conveyors and pipes. You can do large bases that hook up refineries to assemblers, and assemblers to a large storage and fully automate unit production. Even unloading and loading transports or miners can be fully automated. Still, starting from scratch remains a pain in the rectal area.

Additional solutions - especially for the problem of starting from scratch - can be the introduction of a tool or small machine, like a little buggy or "wheelbarrow in space", that allows you to move around larger amounts of cargo even if you don't possess a functional spacecraft. Another solution can be to adjust the default production/mining rates.

What I really like about this game is the fact you can virtually destroy everything. Collisions deform spacecraft and asteroids alike, asteroids struck by missiles will crumble, and failing to decently dock to your space station has the potential to damage your spacecraft (or even destroy it). 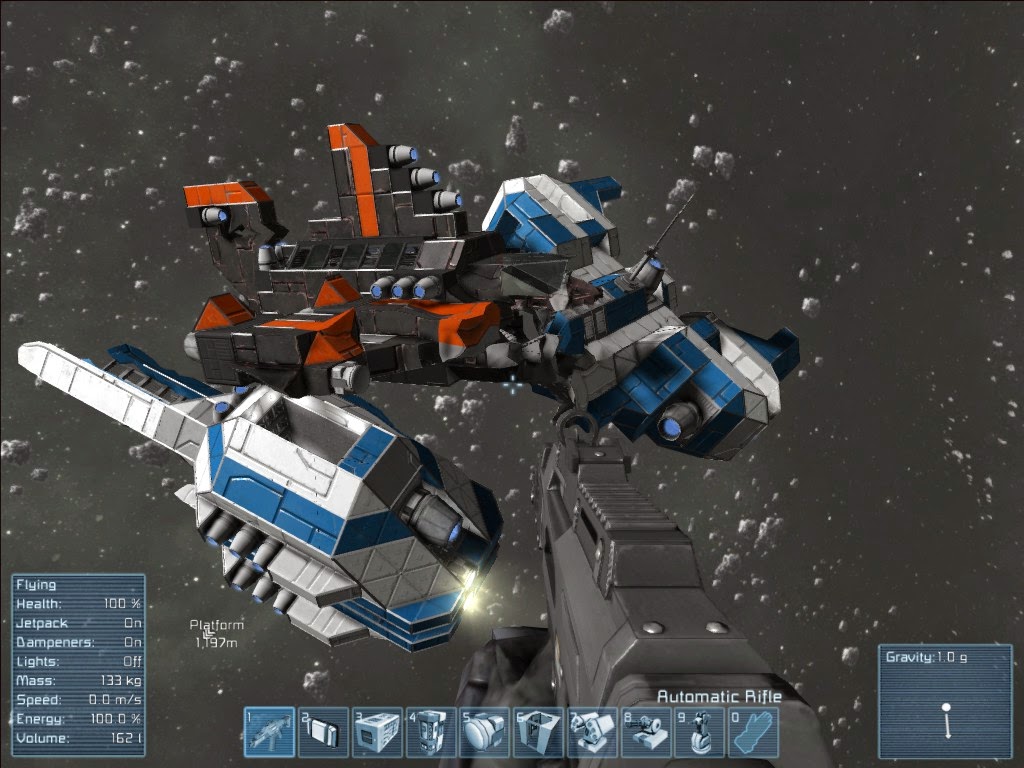 The only problem I have with this damage system is that it becomes difficult to rebuild already destroyed structures and the fact you need a lot of resources to repair it. It may be of advantage if the ship saved the destroyed parts and enables you to replace them with ease, i.e. just by reconstructing them with the welder.


Other aspects that are slightly unbalanced exist, i.e. the production of solar panels (require many resources to build and basically not even worth using if you're starting out) or the fact you're doomed once you run out of Uranium in your base reactor.
But a lot of things are to come to make this game even better than it already is. Visually it's astoundingly simple yet nice to the eyes by providing enough detail to keep you interested. The fact I rambled a lot about its flaws should not hold you from getting it if you like voxel-based sci-fi games.
Eingestellt von b5cully um 14:02