So here a short progress update on CamoTanks! Last week I kept myself busy with varous things, such as GUI, gameplay and the occasional bugfixes. The GUI in this game I want to keep as simple as possible, as it is more a source of information rather than interaction (interaction is only for menus). As you can see by the screenshot below, equipped weapons will be displayed on screen, and maybe I'm going to make these customizable. They are also subject of colorization as described in this article. 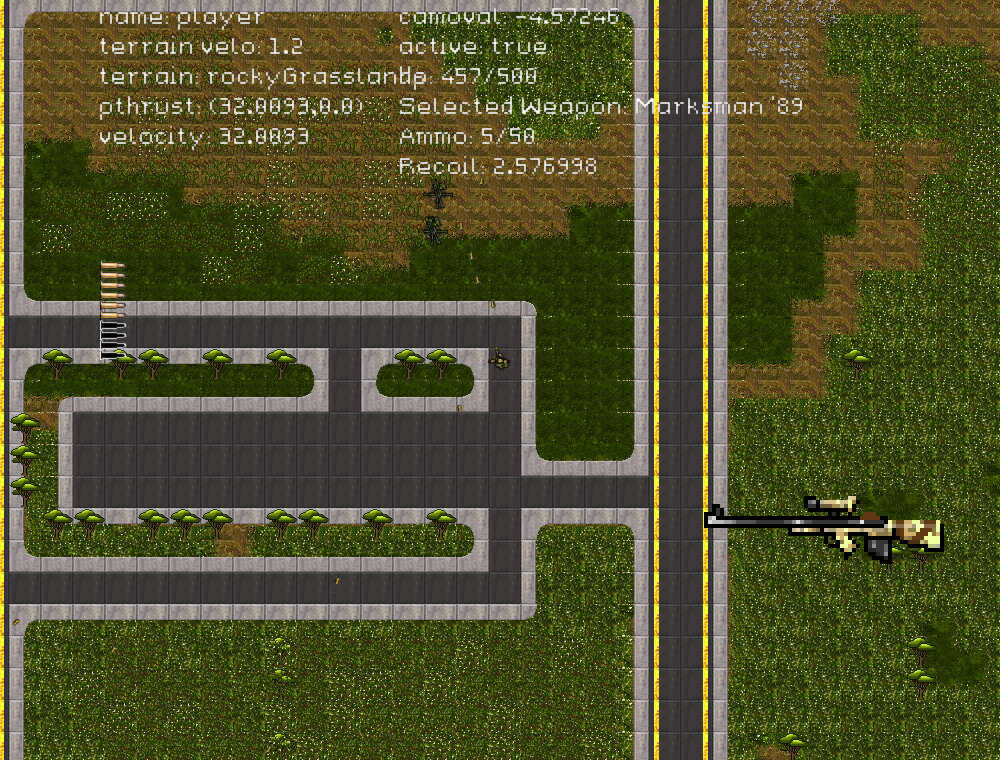 What also has been recently implemented by me are recoil and spread for weapons, terrain "fluidness" (determine how fast you travel on inaccessible terrain), and multiple fixes for reloading.

I also have added sound already. Implemented sounds are: steps (each terrain type = different sound!), firing, reloading, and an environment background sound. Adding sound to this game REALLY changed the entire feeling of it and it was a very exciting thing to do; to see your game come to life like this. I plan to add more various sounds to make this game even more awesome using the free sound library here (which I strongly recommend using). A video demonstrating this implementation will follow as soon as I fixed some things, i.e. performance needs to be improved and I want a semi-working interface instead of pure text first.

All in all development is going well. The code is surprisingly clean and easy to extend. I suppose this is the positive effect of target-oriented coding; aka coding to get stuff done rather than to think up modular systems (the latter I did a lot while working on StarFire and it slowed me down quite a bit).

There is a lot of stuff I yet want to implement, like adding more detail to the camouflage part by adding a "visibility" and "noise" parameter to the AI . Visibility is mainly influenced by camouflage and movement, while noise is influenced by movement only. The AI looks to the direction it hears sound, and only attacks when an actual enemy has been spotted and is not hiding behind an obstacle.

I also want to let the player mount vehicles and add some survival gameplay. Multiplayer is also planned but I need to look into this more.
Eingestellt von b5cully um 14:35